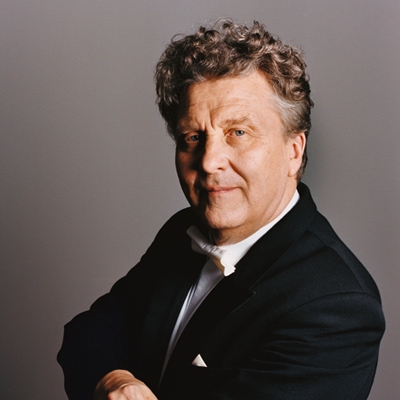 “Sinaisky, whose conducting is precise, sensuous and who has a near perfect technique must have sharpened the senses of the Gewandhaus. This orchestra rarely plays with such boundless generosity, with such flexible dynamic range, with such voluptuous use of colour, so rich in detail and with such a grasp of structure. A truly great Shostakovich – moving, truthful and unsettling.” – Leipziger Volkszeitung

Vassily Sinaisky’s international career was launched in 1973 when he won the Gold Medal at the prestigious Karajan Competition in Berlin. His early work with Kirill Kondrashin at the Moscow Philharmonic and with Ilya Musin at the Leningrad Conservatoire provided him with an incomparable grounding. Soon after his success at the Karajan Competition, Sinaisky was appointed Chief Conductor of the Latvian National Symphony Orchestra, a post he held from 1976 to 1987. He then became Music Director and Principal Conductor of the Moscow Philharmonic, leading numerous high-profile projects with the Orchestra both in Russia and on tour.

Sinaisky holds the positions of Conductor Emeritus of the BBC Philharmonic and Honorary Conductor of the Malmö Symphony Orchestra, Sweden. Memorable projects with the BBC Philharmonic have included the Shostakovich and his Heroes festival, tours to Europe and China, and many appearances at the BBC Proms. With the Malmö Symphony, Sinaisky has toured to the UK and to Amsterdam’s Concertgebouw, and recorded an acclaimed four-disc series of the symphonies of Franz Schmidt. Sinaisky has also held the positions of Principal Guest Conductor of the Netherlands Philharmonic and Music Director of the Russian State Orchestra. From 2010 until 2013, Sinaisky held the position as Chief Conductor and Music Director of the Bolshoi Theatre, Moscow and conducted acclaimed productions including Rimsky-Korsakov’s The Golden Cockerel directed by Kirill Serebrennikov and Richard Strauss’ Der Rosenkavalier directed by Stephen Lawless (the first ever staging of this work in Moscow).

Sinaisky has a distinguished pedigree as an operatic conductor. He recently conducted Iolanta and Francesca da Rimini in new productions by Stephen Lawless at Vienna’s Theater an der Wien. He also recently conducted Boris Godunov at San Francisco Opera. Other projects have included productions of Carmen and Der Rosenkavalier for English National Opera and an acclaimed Lady Macbeth of Mtsensk with Hans Neuenfels at the Komische Oper Berlin.

Vassily Sinaisky’s recordings include the aforementioned set of the symphonies of Franz Schmidt for Naxos with the Malmö Symphony Orchestra. His other recordings include many with the BBC Philharmonic including works by Shostakovich, Tchaikovsky, Rimsky-Korsakov, Shchedrin, Glinka, Liadov, Schreker and Szymanowski. Vassily Sinaisky is a noted and influential teacher, and holds the position of Professor of Conducting at the St Petersburg Conservatoire.