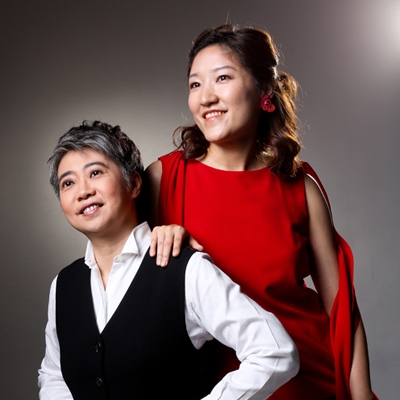 “… musical understanding, communicative power and union in thoughts are astonishing…….not merely a piano duo performance but an interpretation with rich orchestral color.” – Tina Fu from the International Association of Theatre Critic

“Four hands destined to meet. Amity achieved by the two as a team. Occasional contrasts brought surprising heat. An earnest challenge to amuse as it seems.” The Beijing born Hui Ling met Hong Kong born Julie Kuok at the Hong Kong Academy for Performing Arts where they formed the “HK Duo”in 2000. “HK” is also the combination of there last names. The contrasting personalities give exciting chemistry and colorful merge of tones with their genuine interpretation ranging from classical music, jazz, to their own compositions and transcriptions. These include Stravinsky’s “Firebird” and Prokofiev’s “Romeo and Juliet” arranged by Hui Ling, as well as “Nocturne” and “Image- the Reflection of Don Juan” by Julie Kuok.

The HK Duo had been the Artists-in-Residence of the RTHK Radio 4 and participated in the concert series organized by the Hong Kong government celebrating the 40th Anniversary of the City Hall and the 150th Anniversary of Debussy. They had also collaborated with the City Chamber Orchestra of Hong Kong performing the concerto for two pianos by Mozart. The multi-media concert named “Duo & Duologue – In memory of Nadia Boulanger”, interacting music with drama and dance, marked an innovative breakthrough in the performing history of the duo. In carrying out social responsibility, they had given two charity recitals raising fund for the Association Concerning Sexual Violence Against Women. Performances abroad include the Waterford Arts Festival in Ireland, the Grand Asian Piano Concerts held in Korea and Malaysia, the Shanghai Spring International Music Festival, the 2ndYichang, China Yangtze River Piano Music Festival and recitals and masterclasses in the music schools in Taiwan and Xiamen.

In 2010, the HKDuo had its first CD album, “In a glimpse” with only the original compositions and arrangements of masterpieces by the duo themselves.